Fail to Plan you Plan to Fail: The Tale of Two Mexican Restaurants

I want to tell you the tale of two Mexican restaurants.   Why one tried to sell and couldn’t then eventually had to end up closing the restaurant while the other sold in record time for more than they were asking.

Hey everybody today I want to tell you the tale of two Mexican restaurants.   Why one tried to sell and couldn’t…then eventually had to end up closing the restaurant, and the other sold in record time for more than they were asking.

Hey everybody my name is Ryan Gromfin and I’m with the www.TheRestaurantBoss.com as well as www.RestaurantProfitandPerformance.com. Today I just wanted to shoot this really casual quick video for you and kind of tell you about this tale of two Mexican Restaurants. This has been something in my mind for the last couple weeks, ever since I got a phone call that one of my client’s restaurant sold at record pace for more than they had asked for. Which was really really exciting!

The Tale of the First Restaurant

So when I first stepped foot into that restaurant. Literally the concrete was drying on the foundation and I was like oh my God this place is going to be a disaster and the first question I asked “Who did you guys hire to design this place?”.  They said “Oh some architect that that we’ve done some houses with before…” I’m like, “Has he ever done a restaurant?” There like, “I think so. But I’m not sure.” and I said oh my god…

The kitchen was too small. The bar was too small. The entryway was crowded. There wasn’t enough dining room seats. It was just a disaster. They didn’t want to spend the money and change it, so they went forward with the design and we knew we were going to struggle from day one with the design. But we put together an awesome menu and the place started killing it day one because the food was great! But they just never got it figured out. No matter how many times I met with them and trained their staff, and gave them systems, and gave them checklist. They would never put in the work as the owners. They just expected that their employees were going to do everything for them. And so because of that they had huge staff turnover. They had angry customers. They were able to keep their numbers up because of the quality of their food. But eventually their lack of experience in the business, their unwillingness to listen to any of the advice that anybody was giving them including me, their accountant and their bookkeeper, they just didn’t do anything.

Everybody just eventually led to them getting frustrated and disengaged. And then they we decided it was time to part ways because they weren’t listening to anything I was telling them. Their staff was walking out every day. Every time I walk in there was a different staff…

The Tale of the Second Restaurant

But then there’s this other restaurant that calls me the beginning of the year.  They wanted me to come down and take a look at their place, because they were getting it ready for sale. They wanted to try to get as much money as possible—which is something that I do for clients. And so I went down there and I looked at it.  My first reaction was, WOW these guys really know what they’re doing. They had a really good design. And I found out they worked with a great architect who has designed restaurants before. The food was great they had recipes for everything. They had systems in place, they had checklist, and they had procedures for accounting. But they just wanted to get it even tighter to get more money.

So I met with the owners, I met with their restaurant broker, we put together a plan. Within less than a day I had put system in place with some menu changes they where increasing  their check average by I think close to 30%. Something crazy like that!

Because they just had some low hanging fruit that we were able to find. We put a few more systems in place and some other things.  The point is, after my two days there I did some training with their staff, I did some training with them… I said my goodbyes and then I got a phone call like two months later—a couple weeks ago saying that the restaurant not only sold, but  in record time. It was on the market for five or six weeks. But it sold for more than they were asking for. Which is so cool for them! Because it just wasn’t the right business for them. They had never been in the restaurant business before, and this just wasn’t the right business for them.

But it was for somebody!

Because they had a business to sell, not just a restaurant with a bad lease. They had an actual business that could run without them.

“If you fail to plan. You plan to fail.”

The other restaurant completely planned out every step of the way. They were engaged. They created systems they worked with professionals that knew what they were doing.

Look at the results…

So anyways I hope that’s helpful for you. I hope that kind of gives you some more reasons as to why systems are so important. Why you need the advice of professionals. Why you need to plan every step of this journey in this crazy business—the restaurant business. And of course let me know if I can help you.

I hope this was helpful!

I hope you loved it!

If you did, will you go ahead and smash the little blue like button just below video.

Tell them how awesome this video was so I can keep providing this great content for you at no charge. That’s the only way I am able to keep doing this. 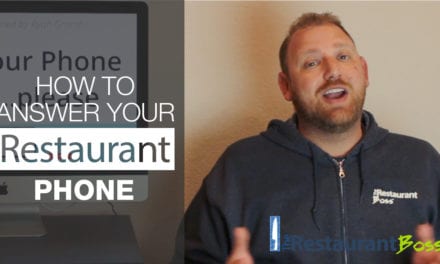 How to Answer Your Restaurant Phone